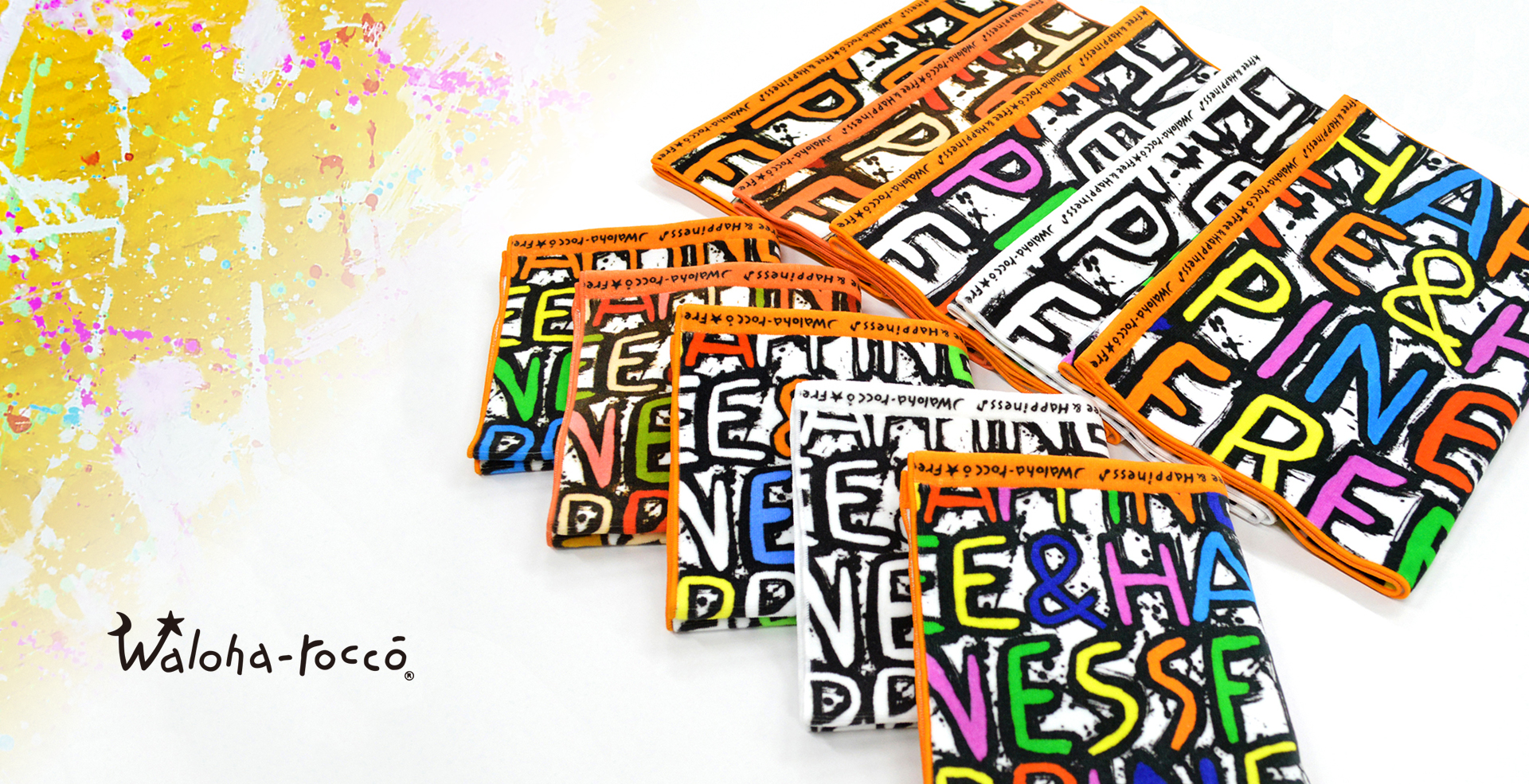 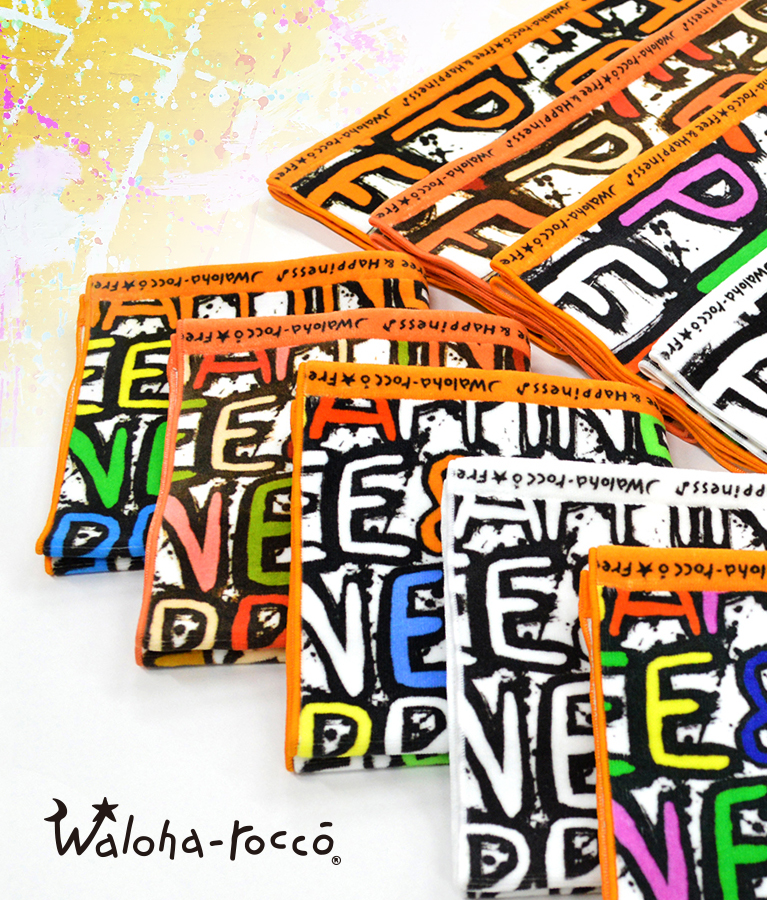 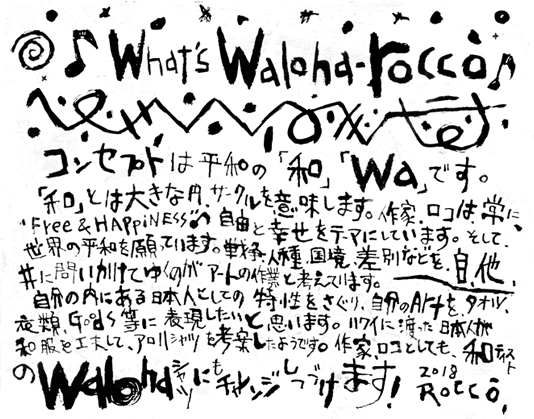 The concept is Wa (circle), and Wa as used in Heiwa (peace)

“Wa” means a large circle or a circle. The artist roccó always uses the theme of “Free & Happiness♪.” And I hope for world peace. War, race, discrimination, etc., I believe asking these questions of myself and others is the work of art.
I would like to search my inner characteristics as a Japanese and express my art in towels, clothes, and goods. Japanese people who immigrated to Hawaii were creative with Japanese clothes and designed Hawaiian shirts. As the artist roccó, I would like to accept the challenge of designing Waloha shirts with Japanese taste! 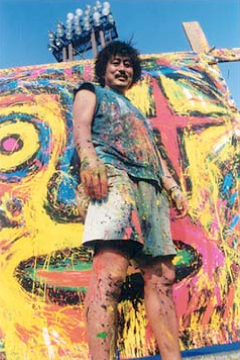 In the late 1970s, he started painting strange-silhouetted murals under the elevated railway tracks of the Toyoko Line in Sakuragicho, and currently, he is known as the originator of wall painting. He painted one of the largest pavilions in the Yokohama Exotic Showcase ’89 and provided his works to the important landscapes that formed the city character of Yokohama, such as the new Honmoku District, the Minato Mirai 21 District, and the Yokohama Portside District. In 1995, his paintings on municipal buses attracted public attention. He has also received many requests for murals from the private sector.
His works have been permanently exhibited in The Hakone Open-Air Museum since 1995. He was in charge of the event for the Shibuya Dojunkai Apartments and the large mural in Omotesando. On the other hand, he has been based in San Diego, California, since 1990, whose mayor issued a Declaration of Gratitude to him. At the commemorative concert for the 50th anniversary of Bob Marley’s birth, he received a Peace Prize. He was also chosen as one of the Best 10 in the Art of the Year in that year. In 1999, he won the Encouragement Award in Yokohama Cultural Award and the Art Category Award.
Along with his art activities, he has been sponsoring workshops. In particular, to deepen connections among the town, schools, and families, he has had many discussions with parents, teachers, and the municipality and has been putting a lot of effort into the reforms of children’s lives and school environments through art. 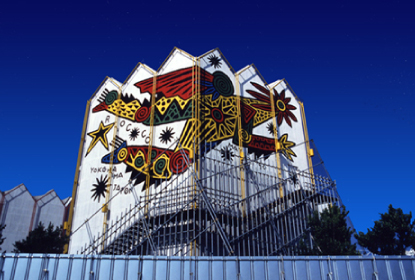 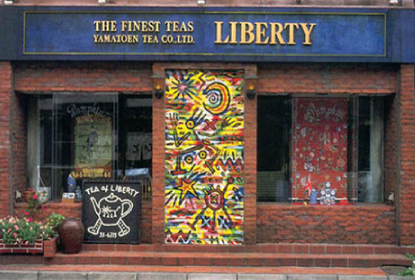 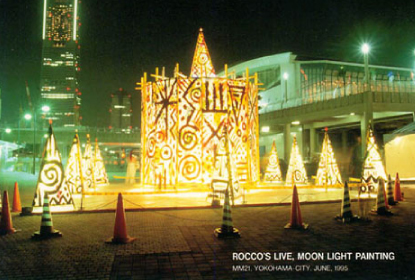 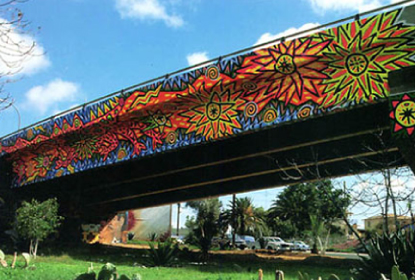 With the Theme of Happiness in Freedom, it is Full of roccó’s View of the World!!

I have screamed “I want to be free!” in my mind.
I have twisted my body, thrashed around, and felt captured by the mysterious concept called “Freedom.” While creating art, when the flow of the brush running on the surface of a painting faded from consciousness, I found my freedom.
“Freedom” was back on to “Being captured.” And I realized that unraveling “Being captured” was not so bad. There is a clue to find light particularly in profound darkness. These things became gears. Such gears mesh with each other and find “Happiness.”.
Again, I am drawing a picture before I am aware.
April 17, 2018 ROCCO 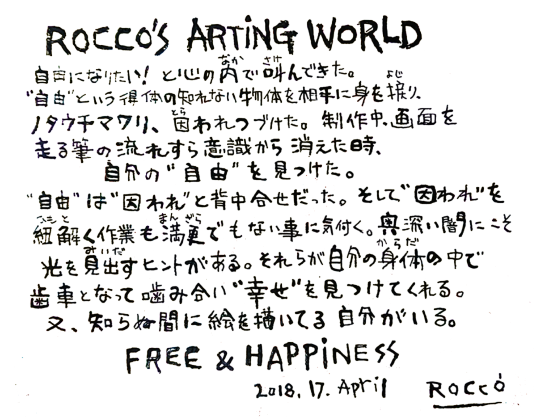 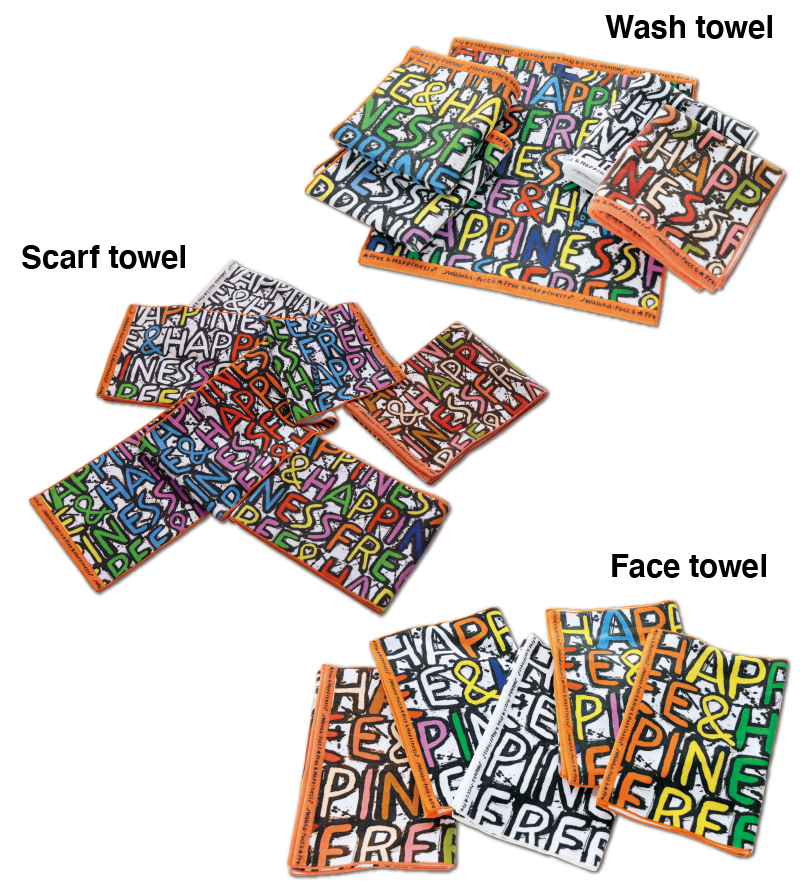 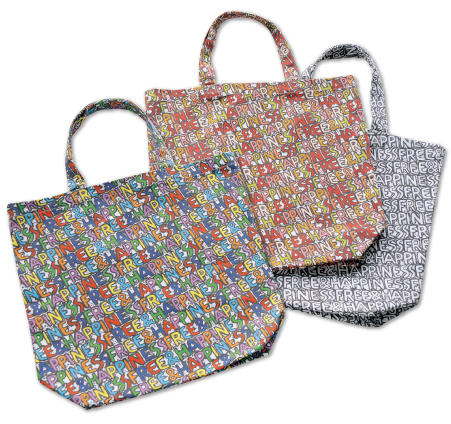 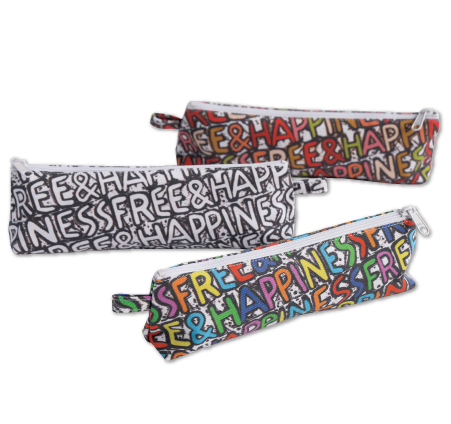 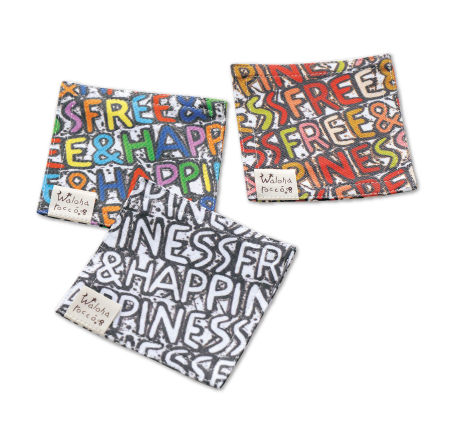 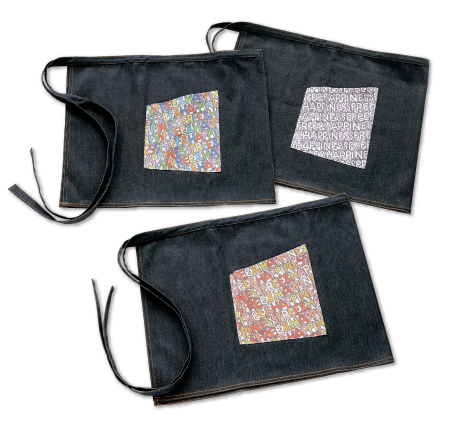 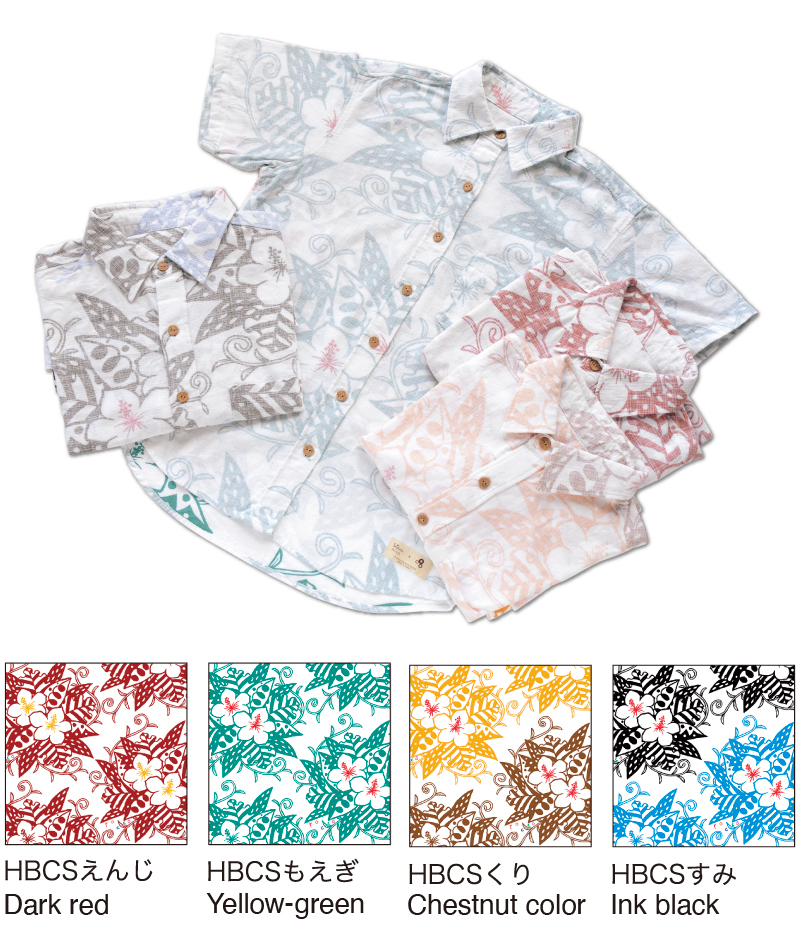 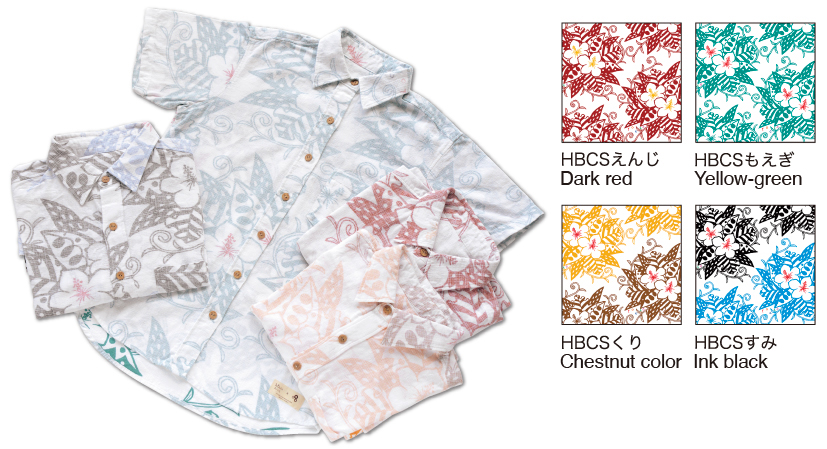